Discounter builds administration and logistics centre in Sarrebourg to supply up to 200 shops in France and chooses primion. 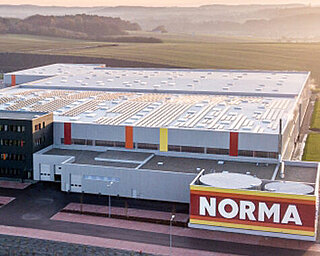 The ability to integrate third-party systems, fast response times in pre-sales support, a customised global solution and geographical proximity to the customer led to primion France winning the contract to equip NORMA's new state-of-the-art administration and logistics centre in Sarrebourg, which was built in a record time of just under 14 months. The new location replaces the founding subsidiary in Strasbourg.

NORMA is a well-known German discounter. The new headquarters in Sarrebourg, France, has over 4,000 square metres of office space and 22,000 square metres of warehouse space on four floors, as well as a new logistics platform to supply up to 200 shops in France. The overall primion project included the installation of the access control, time and attendance, video surveillance and alarm and intercom solutions.

Around 500 employees and their rights for 139 doors are managed in the prime WebAccess software for access control. For offices and meeting rooms, offline readers from the pKT programme were also installed, whose access rights can be adjusted on a daily basis. For the changing rooms, 88 electronic lockers were used.

The use of time recording systems does not have a significant history in France. However, NORMA wanted a global solution and at the same time only one supplier. primion offered here the prime Time software for the administration of the employees in the warehouse, who record their working time via two ADT 1100 terminals.

The system with two digital recorders enables the recording of images for 30 days around the clock. In addition, 35 cameras with 5 megapixels and 360-degree panorama have been integrated to control the storage of goods at the loading docks, as well as 180-degree panorama to control all traffic flows in the area. The new headquarters is also alarmed with a central unit that monitors 80 alarm points in the offices and warehouses and sends information about technical faults in the building to the remote monitoring system (refrigeration management, fire, heating, air management). Employees without a badge use one of the 13 IP intercom stations with video and call buttons.

primion develops, manufactures and installs all systems and components itself. From the initial consultation and planning concept to on-site installation and services such as hotline, support and maintenance contracts, the IT system house offers first-class software and hardware with its own staff and in-house.

primion is the first company in Germany with ISO/IEC 27001:2017 certification for information security in the area of "Time & Security". Other certificates underline the importance of the IT system house for the integration of access control systems, time recording and comprehensive security.