In the current project, 103 locations were equipped with the primion systems; this brings the total number of locations across Europe to over 150. 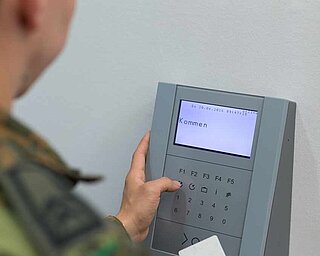 The software was adapted to the special requirements of the Bundeswehr and rolled out to 103 locations. This means that a total of 150 locations across Europe are now equipped with the time and attendance solution from primion. Components for access control were also installed during the course of the project.

Three years ago, the German Federal Armed Forces introduced the "Soldiers' Working Time Ordinance", SAZV for short, prescribed by EU law. The new ordinance serves to improve the occupational health and safety of soldiers by reducing the workload and making the service more predictable. The software and hardware for recording and controlling the regular working time of 41 hours per week comes from primion. In the current project, 103 locations have been equipped with primion systems, bringing the total to more than 150 locations throughout Europe. This means that the total project volume currently amounts to around 2.5 million euros.

To date, those responsible have had to ask themselves questions internally about how to deal with overtime and flexitime. Of course, it was also necessary to define when this regulation would not apply: For example, in national defence missions, international crises, mandated foreign missions or natural disasters.

In day-to-day operations in the respective unit, soldiers record their working time either at time recording terminals using coded ID cards, the eDTA (electronic service and troop ID card) or directly at the workplace using the prime WebTime software on the PC. In the application, the specific conditions of the SAZV had to be taken into account and individually set up: For example, the extension of the data retention period, the adjustment of the offsetting of special absence times, specific calculation rules for the differentiation between flextime and overtime, or the adjustment of the break regulation for service at changing times.

If the weekly defined working time of 41 hours is exceeded, a previously defined group of people automatically receives a corresponding notification by e-mail. The same applies if the rest periods are violated. When booking, the system also automatically checks whether the rest period since the last walk booking on the previous day has been adhered to. The evaluation of the data collected in this way is automatically transferred to the Bundeswehr's own personnel management system. Soldiers can view their own data at any time in order to have an overview themselves.

In the course of the project, components for access control were also installed to protect buildings and grounds from unauthorized access. The prime WebAccess software assigns access rights for previously defined persons or groups of persons to the access control readers and door cylinders. Manipulation attempts are reported immediately and lost badges can be blocked at any time and new badges issued. Offline door cylinders are used to control access to individual rooms, which are rated lower by the security level. Access control readers are usually installed in areas with a high level of security or when large areas need to be secured where stricter regulations apply. Here, too, the postings are documented in the system and can be called up at any time for evaluations. For example, in an attempted manipulation.

One ID-Card for all applications

The coded badges or the eDTA are used both for time recording and for access control, which significantly increases user-friendliness and administration. Overall, the Bundeswehr views the introduction of the SAZV and thus the necessary software and hardware as consistently positive.