The students need only one ID card for time recording, access control, canteen billing, library use and much more. 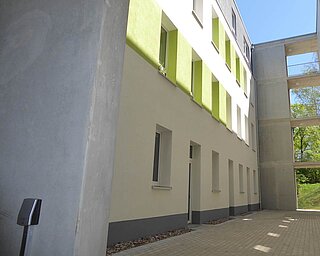 Just one ID card for time recording, access control, canteen use and much more. All students and staff at Thuringia's universities have a MIFARE® DESFire® ID card, called a "thoska".

The Thuringia Student Union (Studierendenwerk Thüringen) looks back on an eventful 100-year history and is today responsible for the economic, social and cultural support of approximately 50,000 students at the ten Thuringian universities in Erfurt, Jena, Weimar, Ilmenau, Schmalkalden, Nordhausen, Gera and Eisenach.

It manages student housing, takes care of university catering in refectories and cafeterias, runs day-care centres, is the central point of contact for questions about student financing, offers general, psychosocial and legal advice and also supports students in cultural matters.

A total of more than 8,000 places are rented out in 73 residential complexes.

All students and staff at Thuringia's universities have a MIFARE® DESFire® card, called a "thoska", which stands for "Thuringian university and student union card". It was introduced in 2001 and was previously used for access control to certain areas, such as laboratories, as well as for time recording, for example for student employees. Mensa use and billing, copier use and billing, library use and administration, student and examination administration, offers such as the use of washing machines and dryers have also been possible with the existing card from the beginning. In addition, identification and payment functions with a money card chip, for example in local public transport or parking management, are also mapped.

In future, this ID card will also be used as a "key" for the students' flats. Due to the constant change of tenants in the housing complexes, a flexible allocation of authorisations makes sense and is necessary. In the past, keys have repeatedly been lost or not returned. The logistical and financial effort to replace the keys was enormous and sometimes led to the replacement of the entire locking system in the residential complexes.

When the tenancy agreement is signed, the Studierendenwerk enters the data into an internal housing management programme. 14 days before the start of the contract, this data is transferred to the prime WebAccess access control system and the card is then activated on the exact day for access to the house and flat and deactivated when the tenant moves out. Rights are assigned by the caretakers.

One challenge was to analyse the processes in a student's daily life in order to ensure the optimal provision of locking rights on the card. As soon as a person leaves the housing complex in the morning and picks up new locking rights for the current day at the university, the existing access to the flat in the afternoon must still be guaranteed at the same time.